Who knew a simple bowl of soup could be the catalyst for amazing community development and support?  Well the people of Detroit Soup knew, that’s who.

In 2012 Amy Kaherl of  Detroit Soup held the first soup event. A $5 donation at the door, you listen to 5 community initiatives pitch for your vote, you enjoy your bowl of soup and bread, you vote for your favourite and the winner gets the takings from the door.  That’s it! Simple! Brilliant!

Fast forward to 2016 in Stirling, Scotland and Kathryn Welch is leading her team of volunteers to launch the first ever Stirling Soup. On the evening of Friday 27th May 2016 the Albert Halls in Stirling was packed to standing room only. I was lucky enough to be the first of the five pitchers that evening making the case for  Contact the Elderly tea parties combatting social isolation among older people. I was followed by Nikki from Couthie Cantie telling us about her Community Cook School aiming to inspire and teach ‘scratch cooking’ skills. Third up on stage was Rosie from The Conservation Volunteers explaining the notion of a Green Gym where volunteers help with tree and meadow planting and wildlife conservation. Next we heard from Sandra from Bridge of Allan Community Council who have plans to raise awareness of their newly refurbished play park by holding a celebration fun day.  Finally it was the turn of Savi and Lesley from Stirling Citizens for Sanctuary. This group are doing marvellous work with refugees coming into the Forth Valley area by providing befriending, interpretation services and practical and material support.

The crowd then enjoyed the delicious bowls of soup and bread on offer from Sprinkle Happiness and Riverside Bakery. Music was provided by the University of Stirling Live Music Society and, as an added treat, Lush were also ‘on hand’ to do hand massages. This gave everyone time to chat to the pitchers further and make up their minds about their vote.  At the end of the day Savi and Lesley from Stirling Citizens for Sanctuary were the very worthy winners and went away with the pot of money from the door containing £630!

It’s a wonderful, simple initiative and for all the pitchers it was an excellent opportunity to get our projects out there in the public arena and to be able to chat to the very receptive audience about the work that we are doing.  Soup is indeed the catalyst for community initiatives, development and support, there was so much good will and desire to help improve the local community amongst those gathered in the hall.

BBC reporter Richard Fenton-Smith, when reporting on Detroit Soup, once asked “Can soup change the world?”  I think the answer to that is “indeed it can!” 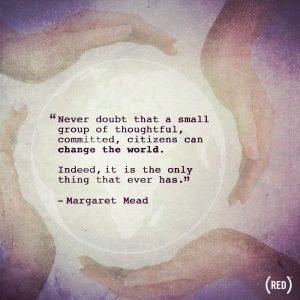 The 6th Stirling Soup is now being planned for March 2019 and is now run by Laura Brown and Liam Miller. If you would like to apply to pitch at it then contact stirlingsoup@outlook.com .  Edinburgh Soup were the first soup in Scotland when they launched a few  years ago, to date they have raised over 5K! There are also plans in place for more Soups across Scotland, the latest one being Dundee Soup which took place in April 2017.